National Volunteer Week, April 17-23, is an opportunity to recognize and thank volunteers for dedicating their time and talents. At John Glenn Columbus International Airport, we're spending this week thanking our Airport Ambassadors and Paw Force One teams for delivering warm, welcoming experiences to passengers!

Our team caught up with a few of them over the past few weeks to get some of their favorite stories, and learn more about what they like most about volunteering. Check out their stories (and photos) below!

Our furry friends bring the calm (and excitement) 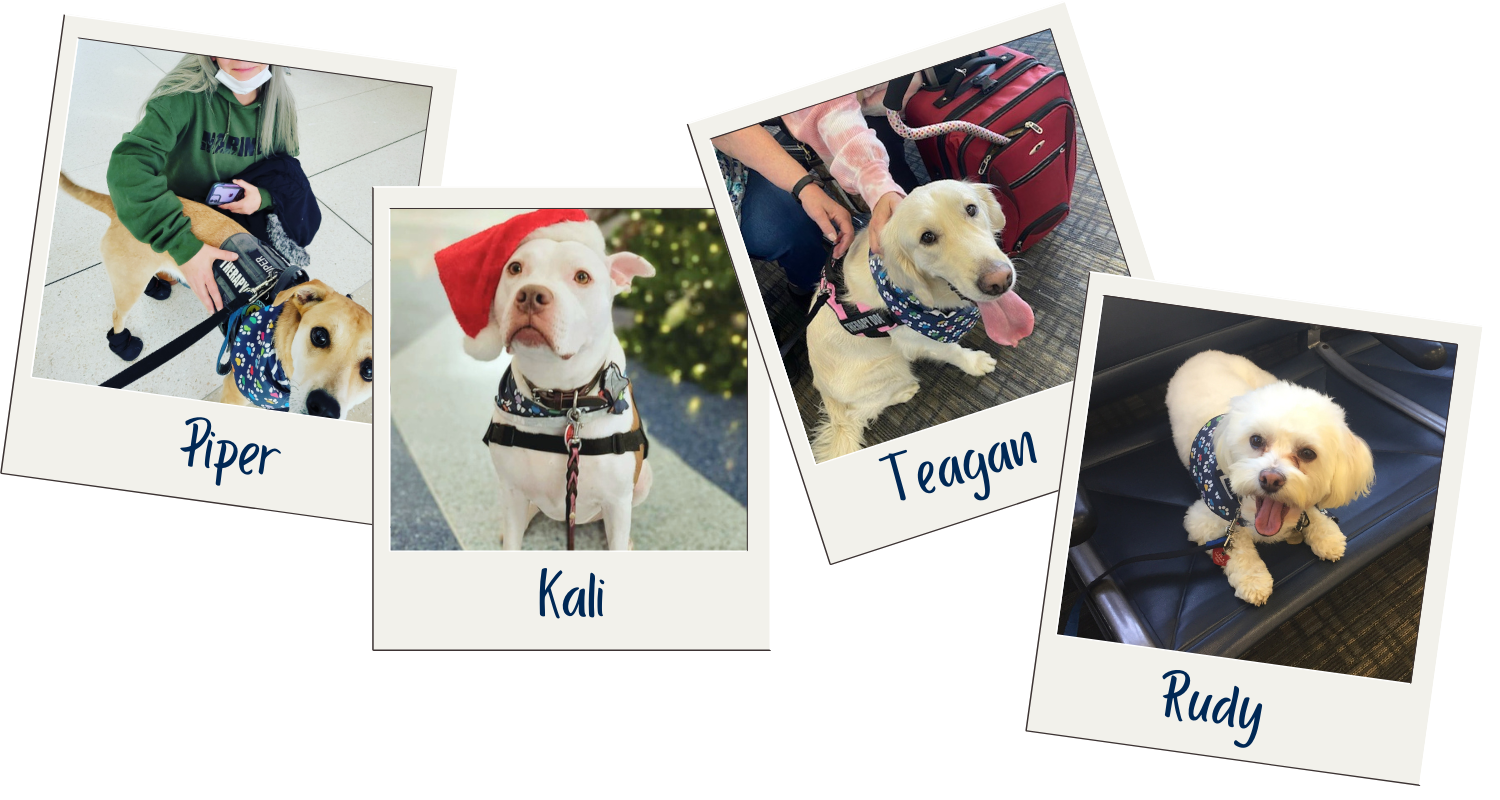 "Just the other day, I saw a lady who seemed distressed. Turns out she was seeing her youngest return to his duties of being a Marine, going into combat training, and she didn't know where or when she'd be able to see or talk to her son again. Piper brought her so much joy and we walked with her so she didn't have to be alone." - Sandra Loya and Piper (Paw Force One)

"Since starting, Thor has seemed to calm some kids down from the anxiety of their flight. He was the best with a young girl who was traveling to have surgery. We made her day!" - Steven Kandybowicz and Thor (Paw Force One)

"I believe that the presence of an animal can help reduce feelings of stress and anxiety for traveling passengers. I have met some wonderful people while sharing the calming gift of some time with Teagan." - Jill Schlotterer and Teagan (Paw Force One)

"I love making people smile with Kali. During Christmas, we were at the airport and a lot of people were waiting for disrupted flights during a snow storm. We stopped and visited with a group of people that were waiting for their delayed flight. Later, they posted on Facebook with #FlyCMH 'Met this beautiful pitbull at the Columbus Airport! Kali is a therapy dog whose sole purpose is to bring a smile to travelers, and to this she excels!'" - Debby Drake and Kali (Paw Force One)

"Walking around with Rudy and interacting with the passengers has been such a fulfilling experience. The smiles we brought to the faces of children and adults alike is what makes volunteering worthwhile. It is so interesting meeting new people and hearing their stories of where they’re going and where the come from. Rudy and I look forward to many more adventures as we continue our journey with Paw Force One." - Ellen (Moo-Moo) Kader and Rudy (Paw Force One)

"It's gratifying to assist those who are first time flyers, especially children who receive the wings we hand out." - Ed VandenBulke (Airprt Ambassador)

"I enjoy the interaction with people from around the world." - Tom Gomia (Airport Ambassador) 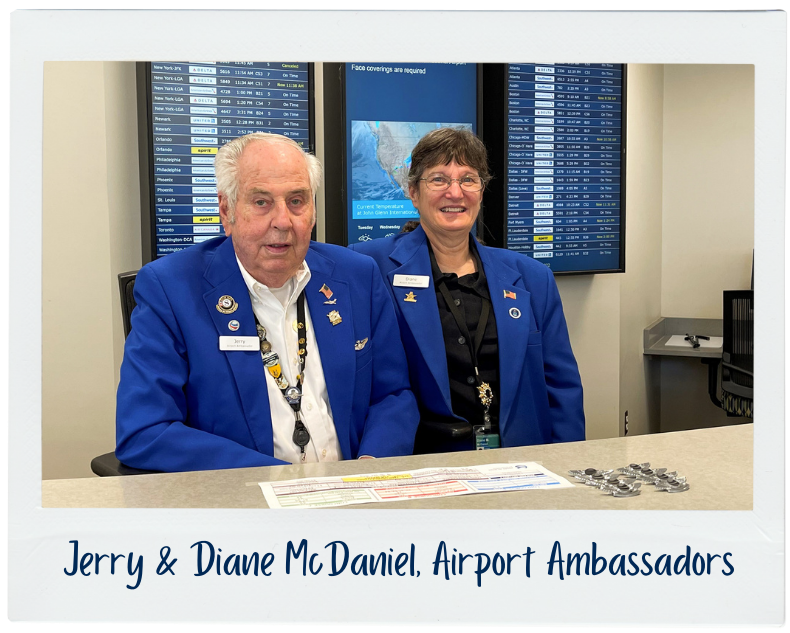 "Jerry has always loved airplanes and the airport. We started here years ago after the Mustang airshow and enjoyed meeting many interesting people and hearing their stories. Everyday is different and some are an adventure." - Diane and Jerry McDaniel (Airport Ambassadors)

"I was employed at CRAA and met a lot of nice people that I worked with. I enjoy helping people in any way and I saw that this would be an avenue to feel good about myself. No regrets." - Carl Leatherwood (Airport Ambassador)

Some days are more interesting than others... 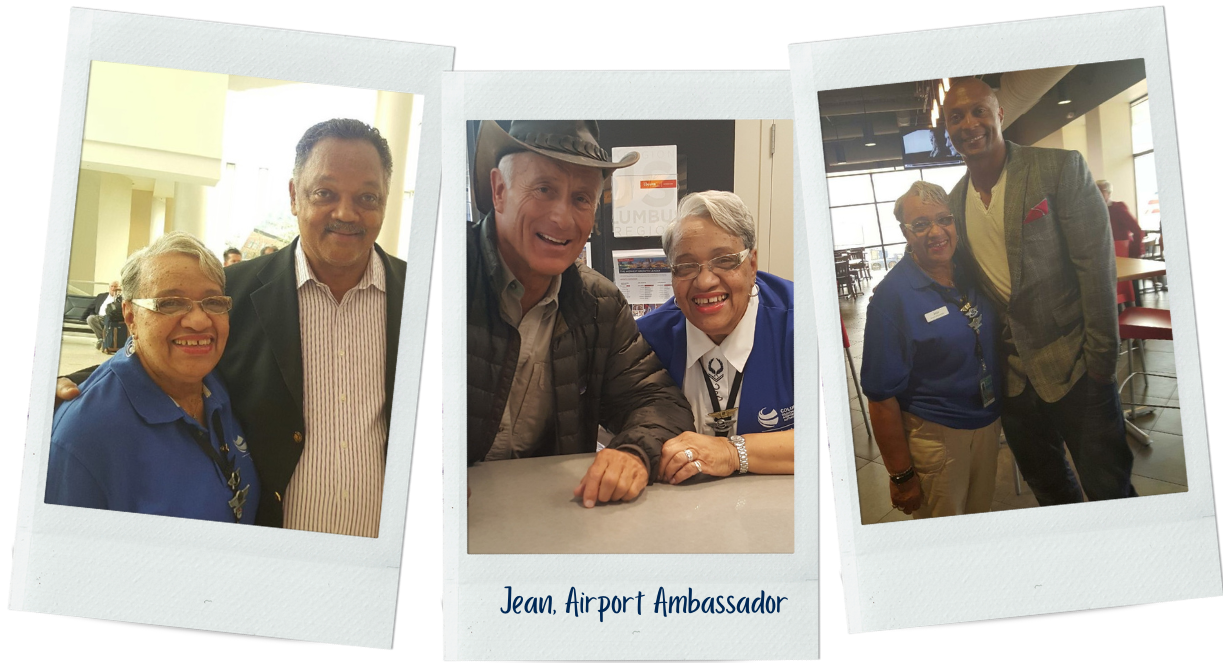 "I've been able to meet so many interesting people like Eddie George, Jesse Jackson, Jack Hanna and many others passing through the airport!" - Jean (Airport Ambassador)

"A passenger came up to me with a cell phone in his hand and was talking with someone on it. He asked me where the other American Airlines baggage claim area was and I told him there was only one claim area. He said his friend was at the American Airlines baggage claim area and couldn't find him and has been looking for quite a while. He asked me to talk to him, which I did, and his friend began telling me that he was at a certain claim number and I told him there was no such number at the airport. Turns out his friend was at Greater Cincinnati Airport rather than Columbus. After he got off the phone, I asked him what he was going to do and he told me his friend was going to drive up and get him in a few hours.  I never did find out who went to the wrong airport, the passenger or the welcoming party." - Jim Thompson (Airport Ambassador)

"CMH provides me with some great stories. Especially the lady who thought she landed in Columbia, SC!! With the expertise of the United staff, she was able to get there ... albeit a few hours late." - Ed Vandenbulke (Airport Ambassador) 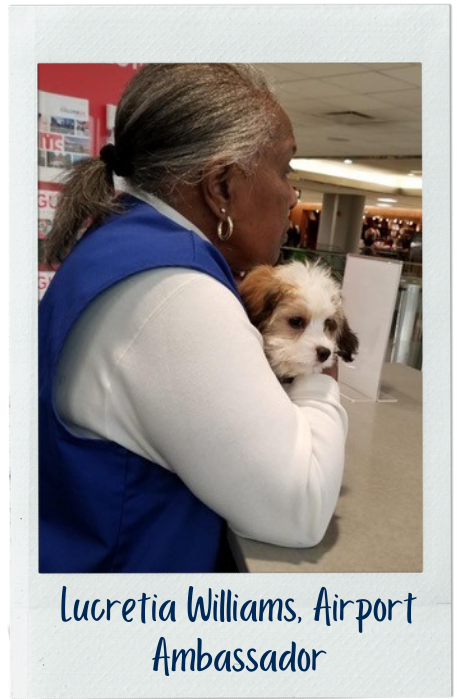 "A kennel owner asked me to hold her puppy while she located the “Dog Flight Nanny” who had flown to Columbus and would transport the puppy to its new owner. Later I googled the kennel online and saw a picture of the puppy. The puppy had been sold for $5,000. I had held in my arms a Cavalier King Charles Spaniel 'Dog Royalty!'" - Lucretia Williams (Airport Ambassador)

In all, we're happy they're here!

"I like sharing about how dynamic Columbus is with so many opportunities for personal growth and accomplishment. I also enjoy meeting people from all over the world and being of assistance to them." - Frances Michalec (Airport Ambassador)

"It’s a fun and interesting place to volunteer. I’ve met and worked with other volunteers, ambassadors, airline agents, custodians and many other nice people who have visited the information station. Many of these people I’ve become friends with." - Tonya Hull (Airport Ambassador)

"I like the feeling of helping people plus working with other wonderful volunteers." - Pam Martin (Airport Ambassador)

"It’s important to give back and to help others. By volunteering at the airport, I can provide assistance to people in ways ranging from simple to complex. It’s a dynamic environment with great support. I learn something new nearly every time I volunteer!" - Mary Pajor (Airport Ambassador)